For a long time the Beltronics RX65 was our top rated radar detector under $300, Recently Beltronics discontinued the RX65 and replaced it with the new PRO-300 model.  While both detectors look similar there are definately some positive changes. 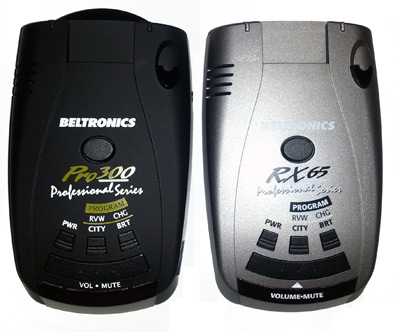 For 2012 Beltronics introduced the all new PRO Line and discontinued the Vector Series, RX65 & GX65.  All new models now come in a black rubberized coating which gives it a nice refreshed look but also dramatically cuts down on sun glare which was distracting to some drivers.

Along with the new look there is also a 3db performance gain with the new Pro 300.  This will mean that the new Beltronics PRO300 will give you more time to react and its definately beneficial around hills and curves when you need the performance the most.

Another improvement is the ability to detect some of the newer laser guns on the market such as the TruSpeed S Laser Gun.  The RX65 was not able to detect and alert to this newer gun but the PRO-300 will alert to it.

In testing one last thing we also noticed was that the detector was also quieter in city driving and it picks up less false alerts than we were used to getting from the RX65.  Beltronics has kept the price the same for the new model so if you are looking for the best performing detector and your budget is under $300 I would definately take a look at the Beltronics PRO-300.